David Leonardo — Lazy Narcissistic Man-Child. I dated Dave casually for about 6 months. He had a good job as a crane operator and he was cute, especially if you’re half cut and you squint your eyes. The problems began after I came back from Mexico where I had gotten a boob job. I had to self quarantine for 2 weeks and he insisted on taking the time off work to help me out. I wasn’t keen on the idea but I thought I could use the company and help with the stint and stitches. I was in a lot of pain for the first week but after I realized I had made a terrible mistake. First of all, Dave did very little to help me. He just sat around drinking and popping my pain pills. On my first lucid day I noticed the apartment really smelled. I looked at the balcony and saw torn garbage bags of take-out, sardine cans, and get this, piss bottles. The asshole was not only too lazy to take out the garbage he couldn’t even go down the hall to use the bathroom. I was already sick if him trying to force me to give him blowjobs while I was still bandaged so I kicked him out. He called me a bunch of terrible names when he left and I thought it was over. But no. He called me a week later demanding I pay his rent because he had taken the time off work and couldn’t pay it! That’s when I found out he lives pay check to paycheck! What kind of grown ass man can’t pay his portion of rent for a shared one bedroom apartment on Davie? I feel bad for his beautiful gay roommate, I don’t know how he tolerates Dave. So that’s it. Keep away from this loser until he drops a pair and grows up. 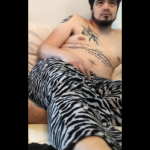