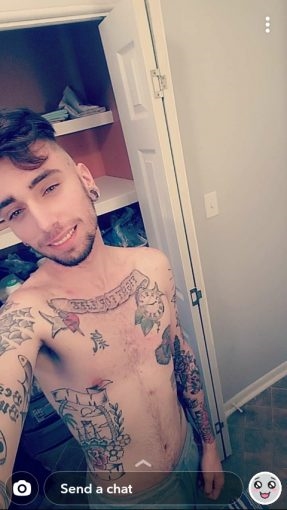 This is Nathan August he’s an tattoo’d ex-convict drug dealer and he’s messing around with the most nastiest screwer skanks from Springfield [Chairty Shadwell] they’d both met each other at a local community church food bank downtown Springfield in March it only took them both a day or two getting involved into fraudulent engagement with costume jewelry rings and the skank has hepatitis all of Chairty’s engagements are fraudulent and fake… Nathan is just completly idiotic and brainwashed by this sociopathic manipulative cvnt Chairty can’t even keep down a job crystal meth must not be as lucrative in Springfield who gets fired from Walmart and McDonalds? And Nathan actually believes that his skank is pregnant when she can’t even get pregnant her fallopian tubes got burned off when she had her son Kegan, and her son was removed from her… her own mother called child protective services on her for child neglect and child abuse, her uterus is destroyed from an failed abortion back in 2016 she’s just chubby not pregnant and Chairty lost custody of her son and not allowed around him or around her mother she’s a violent individual.