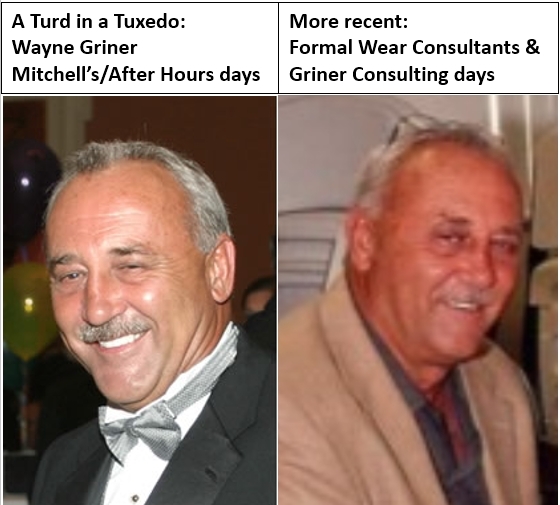 Do you know how to find a turd in a tuxedo? Easy! Spot Wayne Griner wearing a tuxedo and look inside the tuxedo! This white-trash piece of human feces (but mostly feces) and former president of the International Formalwear Association I.F.A. is Wayne Griner and he WILL screw another man’s wife. He screwed mine! My wife fessed up, and though not all, is the main source for the details which follow. She worked in customer service at a tuxedo manufacturing company in Athens Ga. and she handled Griner’s account while he was with Mitchell’s/After Hours Formalwear; one of the largest formalwear companies in the country. He was one of the owners; lending to the adage that white-trash knows no economic boundaries! He knew she was married and that we were having trouble getting along, and he started hitting on my wife. He talked her into meeting him at a gas station on [REDACTED] where she says he got into her car and they just talked; but he looked down her blouse and said that he liked what he saw. Another time he got her to meet him at some business park in the same area, where she got into his SUV. She says they didn’t have sex this time. But finally, one night, when he knew I was away with the kids; he called her and woke her up and said to meet him at the [REDACTED] . He told her not to wear any panties and she complied and yes, she knew he was married and she’s a homewrecker too. They had sex in the back seat of the car. I later learned from a VERY RELIABLE SOURCE that it WAS HIS OWN WIFE’S CAR in which he screwed my wife in! What a guy! I have also learned that that my wife is not the only married woman that he has screwed. He’s scum! And he is a homewrecker! One consolation, and I know this because I asked: you see, she’s a morning bather and SHE DIDN’T FRESHEN UP before meeting Griner! He wanted to do a 69! So, ole Wayne wound up licking on a stinky with his nose nestled near that rectal rancidity! Sweet! He called her a couple of days later and asked if she would be interested in a threesome. Evidently the smell didn’t bother him that much; but she said no to that one. That’s what kind of man he is and that’s really all he wanted her for. I did not have any real recourse since there are no alienation of affection laws in my state…I wish that there were! This was years ago. So, a while back, I started catfishing ole Wayne, just to see. He took the bait and thought he was texting with my wife (he believed that SHE was trying to set up a rendezvous). In nothing flat he starts asking for naked selfies and lo and behold, he sent one of his little limp winkie to me!! Which I forwarded to his wife. I guess you can say that I literally caught him with his pants down! I have since been told that he now has lung cancer, diabetes, and he is impotent; he CAN’T GET IT UP ANYMORE! Even the meds won’t work for poor little Wayne! Frowny face! He’s got one foot in the grave with his d*ck already dead; and he’s still committing perverted acts and still trying to cheat with all he’s got left; and as the man, who he sent the photo to, I can tell you that it’s NOT A LOT! It couldn’t happen to a more deserving person! This is a sick POS slut of a man. But I learned about She’s/He’s a Homewrecker; so at least I can make sure that his low character is exposed. BTW: Today, at the writing of this post, he is with Formal Wear Consultants in Sarasota Fl and is listed first on the “About Us” page of their website and also with Griner Consulting Inc. in Palm Coast Fl. Thank you She’s/He’s a Homewrecker! We really appreciate you giving us a voice! And remember folks: It’s only TRASH that trash-talks this site! How offended they become at the prospect, that the innocent people they have harmed should actually have real recourse with real consequences; like exposing them for their selfish, slutish, actions and the selfish slutish people they are. Keep up the GREAT work She’s/He’s a Homewrecker! 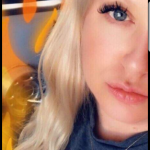