here’s the scoop on this dirty dog, Not only did she lose her child to CAS because she couldn’t stay away from her babydaddy but she openly admits to choosing a man over her kid and laughs about it. When she did have her son she neglected him and left everyone else to watch him so she could smoke cigarettes all day and b1tch at her man. Her boyfriend has caught her cheating multiple times getting into different men’s cars one after another, she’s nasty and a slob leaving dirty mouldy cups and plates in her bedroom her roommate had to fight with her for weeks to clean her room and to stop being out fuking everybody who will give her the time of day. She likes to play victim and cry abuse but yet he tries to leave her and she threatens to kill her self. She always says she’s the a55hole and a fuk up … and tries to get sympathy. She also uses Pepsi and will fucking whine until you give her a l!ne But not pay a cent for it like she’s entitled to the world. This chick needs a serious reality check as she called CAS on the woman who houses her son who is now being adopted out because she will never get him back funny how she was a sh1t mom and now she’s trying to make sure her son gets lost in the system. If you slept with her you should probably get checked she prolly has drds as she showers maybe twice a month and always stinks like rotten sex. 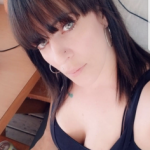