This girl Chelsea Hubber is constantly going from relationship to relationship, sometimes cousin to cousin, and sometimes she’s with the bf’s friends on the side. Recently she’s started using the stripper pole which she proudly posts on social media in her home. She used to do drugs and can’t keep a job for more than a few months, she’s constantly posting things on fb seeking attention and she wants to be spoiled and have fancy dinners all the time. She will befriend any guy she thinks she can squeeze money or “love” out of. She got a dog from one older adult boyfriend of hers and now she’s having dollar bills thrown around her house as she dances for a whole slough of guys. She’s also made attempts to get guys tied down to her by means of procreation which all ended terribly. Recently she tried to rekindle an old flame with my now boyfriend because she broke up with hers and I put a stop to it. Leave other girls’ boyfriends alone and stick with your own. Makes you sick when your neighborhood has people like her in it and. To think we used to be best friends 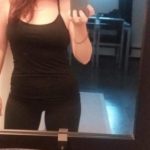