Hi all! Meet Denise Czuray. This piece of trash has been passed around more then a pair a sox from the thrift shop. Welfare and her nasty pussy is what get’s her bills paid. I have never met someone like this in my whole 27 years of existence, and I have met some pretty messed up people. She will suck you dry than head off to the next poor soul she keeps on standby. She has no standards what so ever, I have seen her first had drive around with one dude than post about her hubby a short few hours later… Not only did she bang an entire gang of wannabe loser’s, she also loves clubbing in other towns as well to hook up with a piece of strange from time to time. Getting a real job is too hard for this child, so she milks the system as hard as she can just like the other 75% of the population in her scvmmy town. She claims she wants a “normal” life but that’s just the bait for the next big fish to bite. This p.o.s has no intensions what so ever to change or ever be serious so WAKE THE HELL UP PEOPLE! STOP FALLING FOR ALL THE LIES. She claims every partner has been aggressive, hit her, mentally abused her, scared or put her in danger. So who seems to be the real problem here? Y’all can’t all be this stupid.. or maybe you are. Just watch your selves, don’t let this cvm guzzling slop turn you into her next victim, she’s a fuk hole and that’s it!!. If you have hit it than get your selves checked, there’s drds and probably other sexually transmitted drds in that whole accidentally created group of guppies. Very unstable person too, it’s a miracle she even has a child in her custody… Female’s are crazy but the one’s like this hoe make me feel like an absolute goddess. So I’m sorry to spill the beans, but thank you for making us normal women feel good about our selves :)). Cheers! 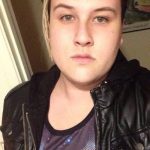