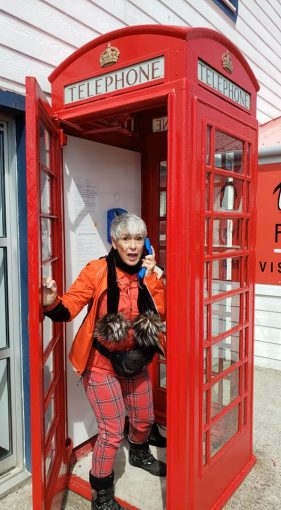 Vicki Iris Winters, a 63 year old who lives in NYC and is known mostly for her voiceover for a character called Coco Bandicoot, from “Cortex Strikes Back” however, most of you are aware of the game Crash Bandicoot and will know the characters from that. She’s registered with SAG AFTRA NY. She mostly just does background work, the acting work she has done is too boring to take up valuable text. Vicki has also worked for several travel agencies including her latest one Bucket List Travelers. She was fired from her previous job as a travel agent for using the F slur for gay people online and acted out of control on Periscope as she often does. Vicki calls herself “MyBigFatMouth” on many platforms and admits she’s all over the place. She has earned her nickname due to her outrageous behavior. Often Vicki will roll her eyes, scream at her supporters and target others online in which she creates Periscope titles called things like “I don’t mind making fun of people”. She seems to have a series of outbursts that bring attention to herself, she admits to being ADHD diagnosed. She also seems to have a bad habit of fat shaming people despite her own weight issues. I can only assume she’s projecting her fat onto others, as Vicki has an excessively large muffin top and often wears animal furs which makes it worse (as shown in the pic). Vicki treats her life like a resume. She has a laundry list of things she wants people to know about her life, but she never bothers to tell people she’s nuts and can snap at any time. She is part of a group called DayBreakers which is a dance group that “social distance” dances to ancient songs nobody cares about. I’m sure they’ll be so proud to find out their member officially made it to the Dirty for being a dirtbag. As someone who likes to gang up on people like Vicki does, she has been part of a small scale cybermob of 4 people total including Vicki with just shy of 100 screen names each (I know, sounds ridiculous someone would have that many but it’s been proven), for the last 3 years on Reddit attacking a man who is a popular social media personality named Joe Symon. She became enraged and joined the hate club to fill in for the boredom she experienced with her minimal viewership, much of which she scared off by being crazy and hateful. She has also attacked others on social media including Jim Saroka and Manuela Gachuzo for their lives in which “too cool to be bothered” Vicki Winters has determined they specifically are unsuitable for breathing. Vicki is at an age where she’s devolving and so there’s no help for her to change but this page can warn others to avoid her if you don’t care for people who are too snobby and righteous with an extra boost of mental.