This is Alexandria Spreitzer or Allie. She is a “secretary” or “assistant” to a lot of older fat white men. When you ask her about it she is vague and says she makes a lot of money for the men. Never will be straight with an answer. But I always found it weird she was traveling sometimes international as just a secretary. Well turns out she’s an floozy. And she needs all that money for all of her legal problems. She’s been pinched for multiple duis. Several times with cocaine on her, once with cocaine in her. She was close to facing prison time. She drove her car off of a second story parking garage once and jumped out LOL. She also has several drds but doesn’t disclose ( I know because a friend got one like an idiot). Did I mention she will sleep with any and every man if there is a line or a c note offered. She’s been all around Chicago and the Burbs even skanking up the craft beer community. Now she’s hooked a new man who’s name is James Bean haha you cant make this up. He’s got a lot of money and live in California also a fat white male. She will be with him until she licks that honey pot clean or he catches one of those drds. Girl is just a big loser. Beware. 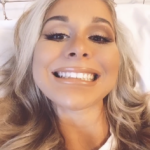