This b1tch has absolutely no morals. She came over to my place four times knowing her greasy friend had bedbugs who she got them from. She told me two weeks after the fact of finding out she had bugs in her place. So once she told me I had to tell all my friends and family I could possibly have them because I actually have morals and it was embarrassing. It would be different if she told me right away, I wouldn’t post this if she had. So for that, I’m exposing her, not only for bedbugs. Ya there’s more. So this lil nasty contracted herpes from someone, not her fault. Karma is a b1tch tho. And then she started dating someone else this year and knowingly gave them herpes. She hardly ever showers or changes clothes and her place is a pig Sty. She used to specifically date and go after guys who she knew are addicted to xans and purcz. So she sold herself for xans and purcz. She was a pepsihead for a few months. She’s also a crackbaby and she’s socially awkward af and ugly idk why I was ever friends with her. She literally told me her mom smoked crackand drank with her while she was pregnant. Which is why she’s so messed up. Also Michelle was pregnant too but had a miscarriage because she was smoking weed, cigs, vaping and drinking for three months. Avoid this pos at all costs. Hope you get what’s coming to you sweetie. I mean you already have drd but you deserve a lot more than that. 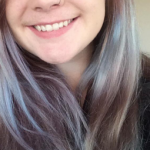