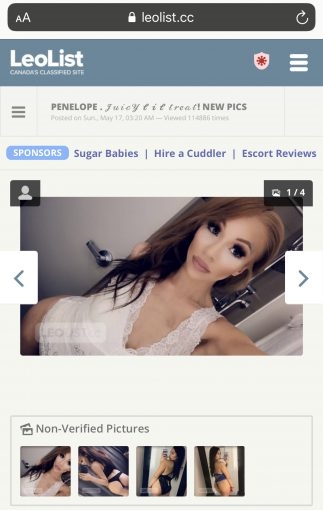 Hey Nik listen here this is Courtney Wesley aka Penelope she is know as the dead beat mom who doesn’t take care of her kids so her and her ugly boyfriend can sit in there SHACK of a house in elmwood to get high on drugs and fuk men! He lets her fuk men in the home for money to support their drug habit! GROSS. She sucked my friend off for a hoot! She’ll do anything for $10 or Drugs! That’s how this Cr4ckheAd lost so much weight in soooo little time. Riding D!cK and doing drugs. She thinks she’s the shit but really she just looks like a tiny little methedout slooooot. Her own family doesn’t even like her, they’re always talking sh1t about her and her boyfriend AND not to mention her and her weird a55 boyfriend are making amateur P0rN on P0rnhub *PUKE* And when she moans she sounds like a crying/squealing animal I dint know how anyone can put up with that. Just look for yourself! Search up Winnipeg on the site and do ya digging, their account is “nohatersalowed” She also has the ugliest B00Bs I’ve ever seen! Saggy, wrinkling and nipples as long as the Grand Bridge. And she claims to be 25! Don’t be fooled she’s 30! I feel bad for anyone who has to deal with her ugly/manipulative A$$!! Always trying to make everyone feel sorry for her own mistakes! All she’ll ever be is a bum on welfare who sells her self to make a buck!