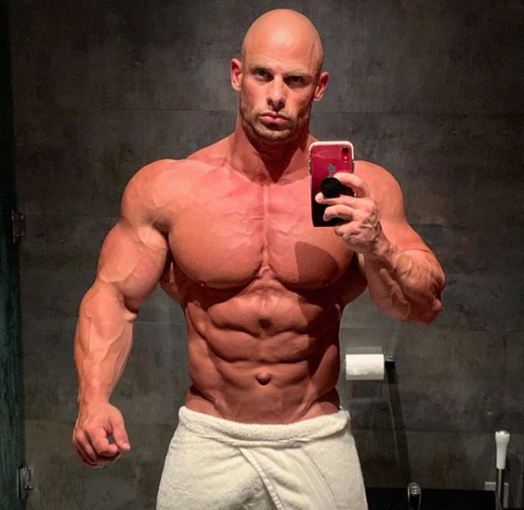 Joey Swoll Discriminative Bodybuilding Parasite.Apparently Joey Swoll has made the rounds here on The Dirty this past decade. We know him as a steroid/drug junkie needle injecting ape who is an infamous gay floozy (pornstar) that prides himself as a con-artist (selling trash like crap supplements, poor fitness programs, and junk food) with infamy of being a blatant roid-rage asshole with a deplorable existence. Yet, here he is again in this decade of 2020 as a discriminative bodybuilding parasite. I attended his live chat last night on Instagram (which Joey enjoys and feeds off the attention on late nights) eating like a vulgar and feral pig with zero table manners, respect, nor dignity with food flying everywhere on cam, talking with a mouth-full in all his gluttonous glory, and that crap dressing he spams everyone with in hopes you will buy his homemade pus he calls a salad dressing! Earlier in the chat, a gentleman in the chat asked about his fitness program in why he should pay for his fitness program he is constantly advertising. For illogical reasons, Joey became peeved and attacked him by attacking his character and making racial slurs in what he said: “figures, it’s your first time in my chat cuz you’re a 52-year-old (he was actually 24) n*gg*r probably living off food stamps. If you can’t afford my program, then get the fuk outta here.” He ended up blocking that user. 5 minutes after, he made xenophobic-racist commits in regards to a topic about the state of the country and suggested people should leave the USA if they don’t like it and suggest they move to Venezuela (implying it’s bad quality country or in his words “or whatever sh1thole in Latin America.” An online client was offended as she is Venezuelan and said his remarks were rude and uncalled for. 3 minutes after that racist comment, users asked why he was being angry all of a sudden? A user asked another political question if he supports Trump? Joey went on full-blown Trump Mode spouting all sorts of nonsense. He checked himself after that drunk rant and then contradicts himself by insisting he didn’t vote for him nor did he vote in 2016. However, this albino orangutan forgets that he stated that he did vote and voted for Trump In his live chat two nights ago. Caught in another lie! A woman corrected Joey and everything he was saying and then he went lost his chill with her. He attacked her and made hideous vulgar sexist remarks by sexually harassing her that “you came in my live to suk my d1ck!” And blames her why this country is in a “sh1t” state because she a spreading “fake news” and attacking people for having different opinions and bveung “patriotic.” Given the fact that all this woman did was just state facts with supported data. So he blocks her as well! I came to her defense as his mishandling of it was atrocious, and attacked me with homophobic remarks and in delusional, claims every f*gg*t has wet dreams about him. Before he blocked me as well, he claims “all you f*gg*ts are good for is spreading drds.” Now to the parasite part of the post, a friend of mine confessed to me that she use to date Joey Swoll back in the summer of 2011. She broke-up with him shortly when he arrogantly said he was dating another girl and using her to pay for his expenses. He was unemployed and getting that cash from that girlfriend and other women. Apparently when I researched Joey Swoll, the claim ended up being true that he leeches off of women for money and most of the girls claimed he was unemployed so it gave off a “red flag” that he is a burnt out bum and a massive loser! Apparently Joey drugs girls and does stuff to them. As we all know, he has been doing gay pornography and “escorting.” In addition , he was also a stripper that allowed men to touch him sexually which he claims it’s called “muscle worshipping.” Nowadays , he is being a glorified snake oil salesman selling trash that doesn’t work and being a walking and breathing human drugstore in social media and calling himself an influencer. It was proven that he buys his followers on Instagram so don’t believe the hype. Lastly, before I end this tea-spill, there have been rumors of him wearing a wig. In the live chat, last night his edges looked a bit out of line and saw trinkles of shiny stuff above his forehead like glue or something. Could be sweat, I don’t know, but that hair did look as stiff as hay. For the ladies out there, avoid him and reject him if you don’t want him to ruin your life and end up inflicted with regrets and for those looking for fitness programs, I caution you to avoid him as well. Thank you! 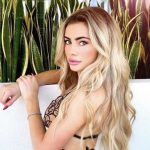 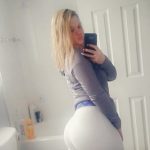