This is Raven, she is a mom of two. She hates being a mother. She complains every day about how she hates motherhood and wants to run away. She spends money non stop on useless sh1t. Her needs come before Her kids! She wants attention all the time and if she don’t get she starts to flip out, bipolar much? She has to go on social media and beg for money to get formula for her son and diapers. She never cleans. I’ve had friends who lived in the house and my god it was awful! Nats in the sink and dishes with mold. Her toilets were so gross one of her roommates had to hold their kid over the toilet to go. The roommates always cleaned. Her husband can never pay bills on time due to her spending money every second of the day. She rather buy ridiculous amounts of weed instead of buying essentials for her kids. She doesn’t have her oldest child because she can’t handle her and has to live in a RV with her infant son and husband. They depended on everyone to help catch up on their bills they were behind on. She also abuses other people’s kids! She punches them in the head, leaves them home alone and much more. I’ve seen videos of her talking at her 3 month old child saying “sh1t the fuk up you stupid baby”. She then calls her husband saying how she hates her baby and much more! It’s very sad. This woman has no business having children and should be sterilized. CPS was involved with her at one time. A neighbor called because of her screaming at the baby. Keep your kids away from her, they will suffer abuse physically and emotionally! 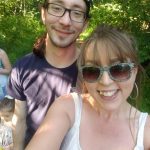