Sara “beara” this disgusting piece of work loves to slam her fingers in doors and act surprised when it hurts. She has bounced from guy to guy while fuking her current disappointment she calls a bf. She has left him several times and runs back to her drug dealer exs. Only to come crawling back since nobody wants her long term she has to bounce from house to house with her daughter. She plays mind games and not even her parents want anything to do with her. On top of that this girl feeds her daughter p synthetic meth pills. Claiming she has behaviour problems but the behavior problems comes from growing up being told every guy your mother dates ,is your daddy. being moved from house to house, with a mother that talks to her like a pos and makes her wear clothes that she isnt comfortable in.. the emotional verbal physical abuse she inflicts on everyone around her is uncanny. This unstable b1tch loves to act like a victim. But the truth is she does everything to herself. She talks sh1t about her partners children calling them whores and sluts. Which is clearly a projection of her own description. Claims rape in one threesome but in the same sentence talks about wanting to be in a threesome.. This crazy b1tch doesn’t know up from down. Her a55 from her mouth. So stay clear if you want to be drama DRDs free. 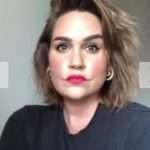 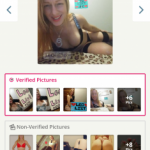